The Brief
Our brief was to create four luxurious and colourful bathrooms with interesting design features for a Huf Haus inspired new build project overlooking the Inchgarth Reservoir in Cults, on the road to historic Royal Deeside.

The project was driven by property-owner Marjory Meldrum. Her passion for design and talent for incorporating an array of vibrant colours into the home, made colour an important must‑have in the master bathroom, two ensuites and cloakroom toilet. “I start a room with a single item, it could be something small, a cushion, throw or curtain,” explains Marjory, “From there I build a palette of colour for the room, creating a bold, but harmonious effect.” She chose Laings for the design and installation of her bathrooms because, “Whatever your design or installation challenge, Laings always find a way to make it possible.” 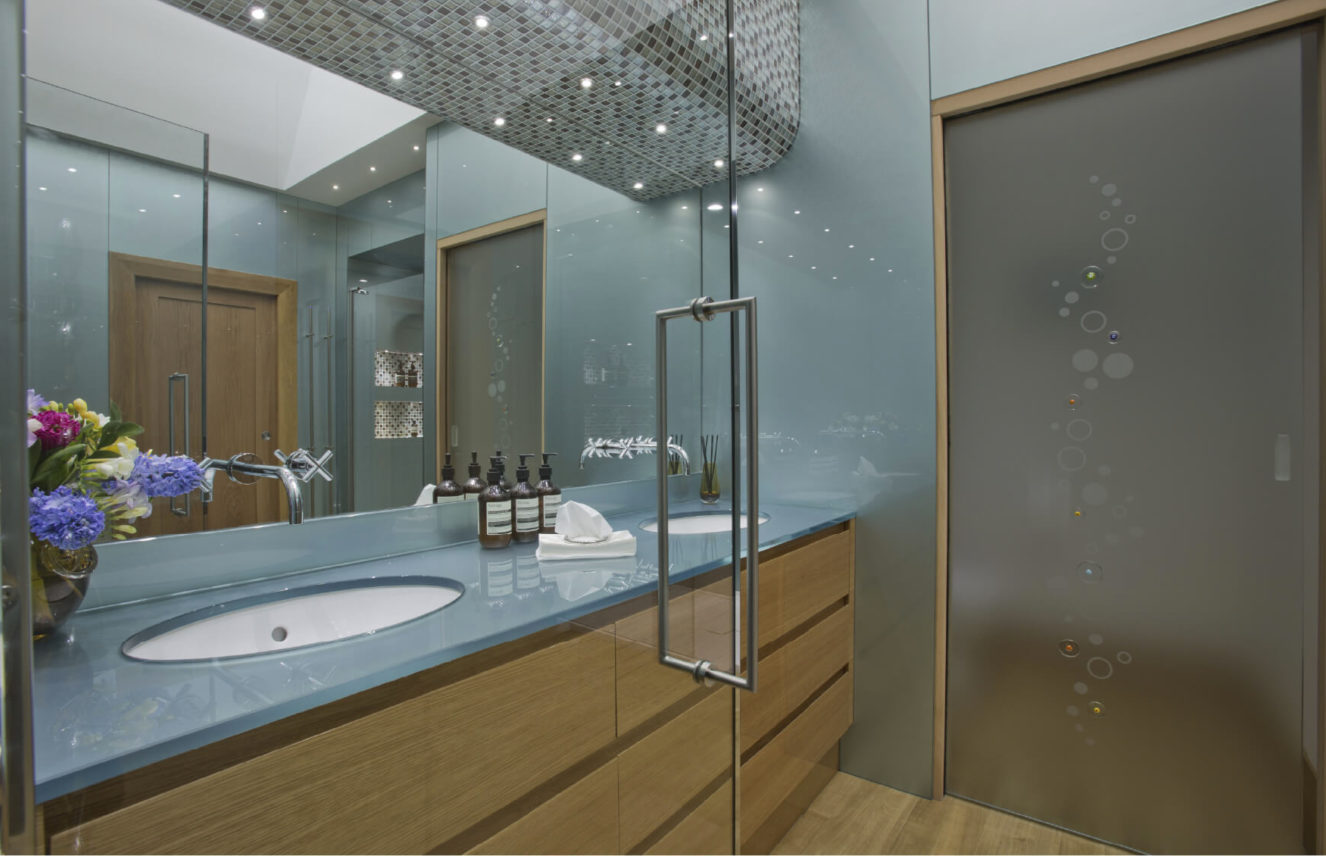 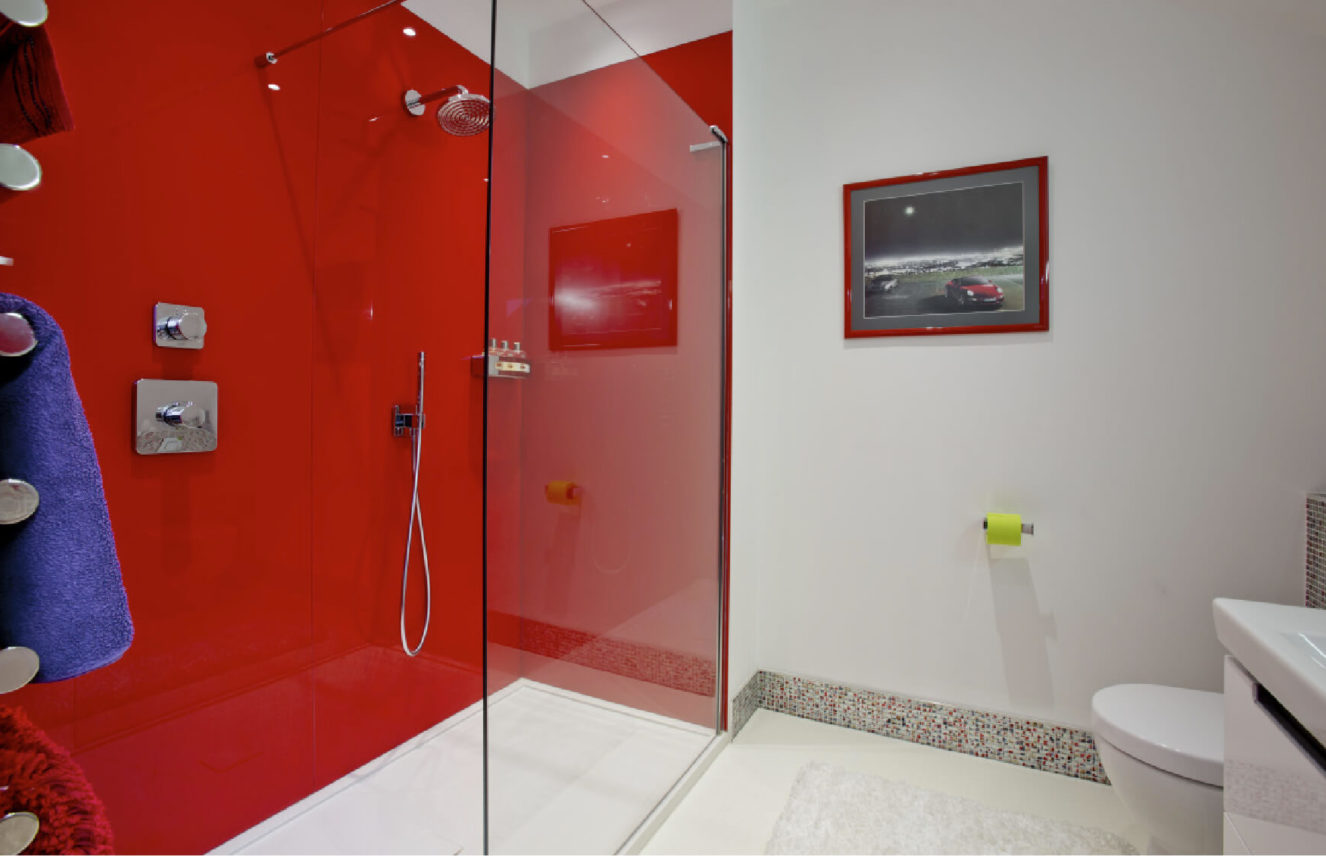 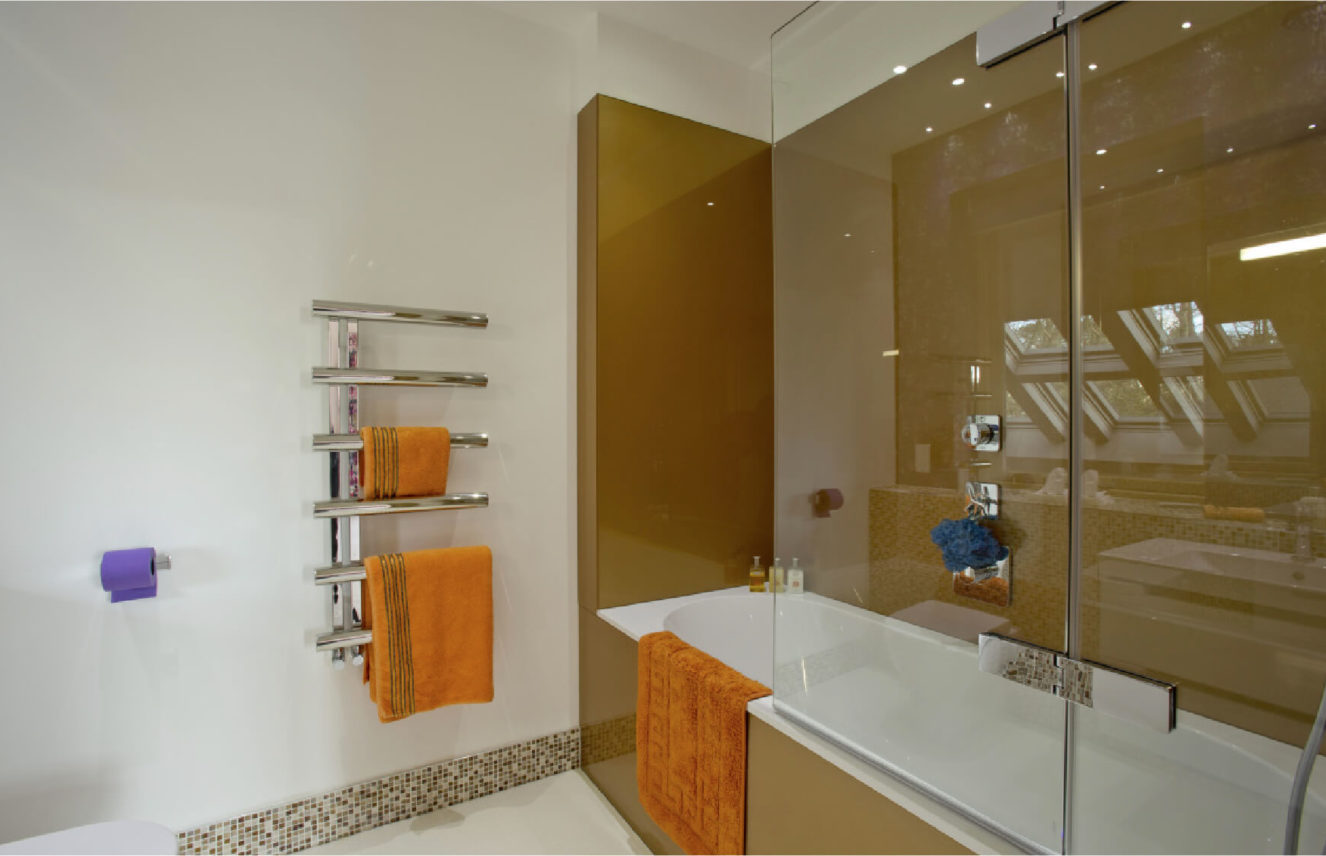 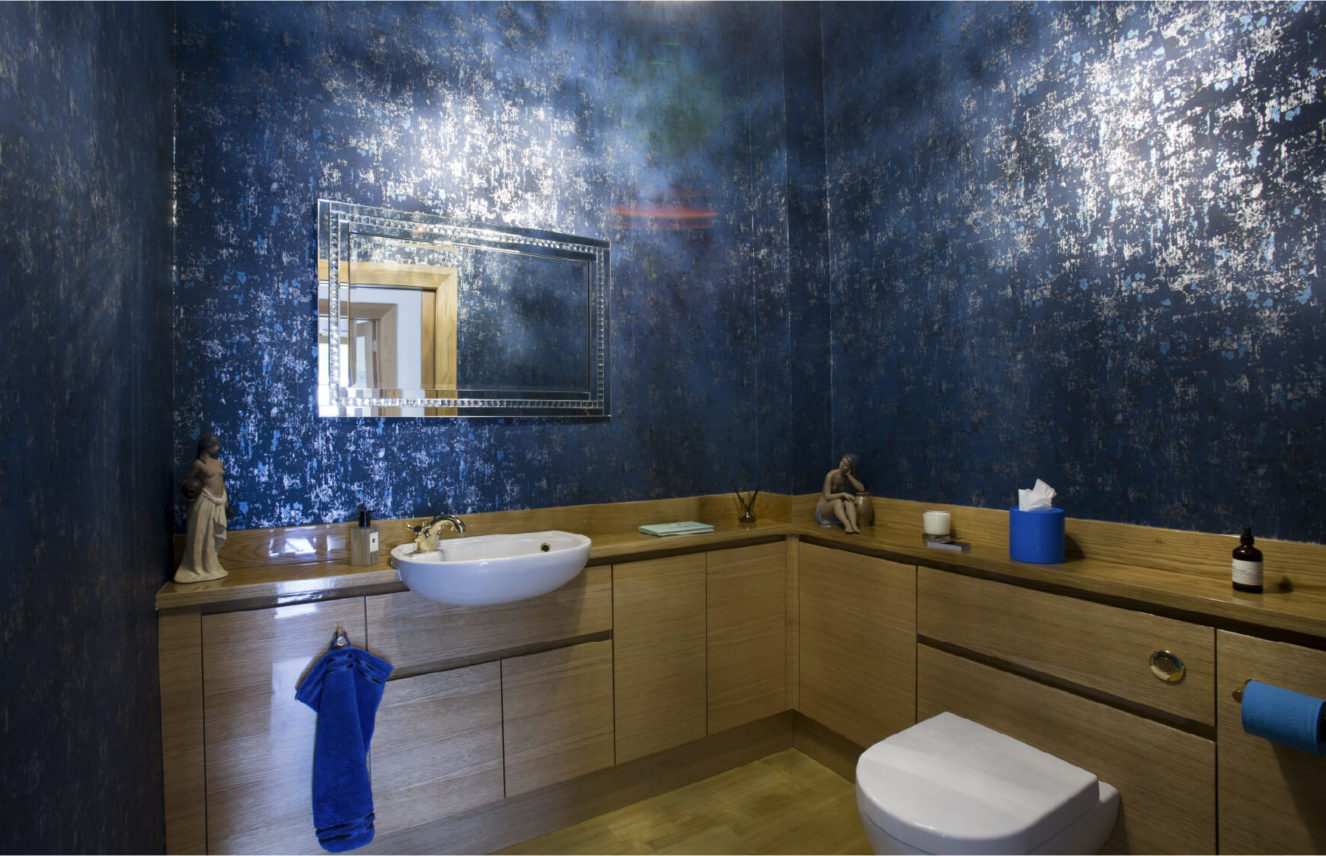 Marjory had a definitive idea of the overall style she wanted for the house, so it was crucial that the bathrooms reflected that. As the house drew inspiration from the clean lines and bright, open spaces of a German Huf Haus, it was important that each room appeared seamless. In Marjory's previous bathroom, we had used coloured glass instead of tiling on the shower walls to great effect.

We utilised glass again, using a different colour in each bathroom to complement the corresponding bedroom – cool blue in the master suite, bright gold in the first ensuite and pillar box red in the second. The cloakroom was designed in line with the kitchen, which it is situated just across the hall from. We installed bespoke Charles Yorke furniture, in the same high gloss, horizontal grain American oak as the kitchen units, to create a unique space with lots of hidden storage. 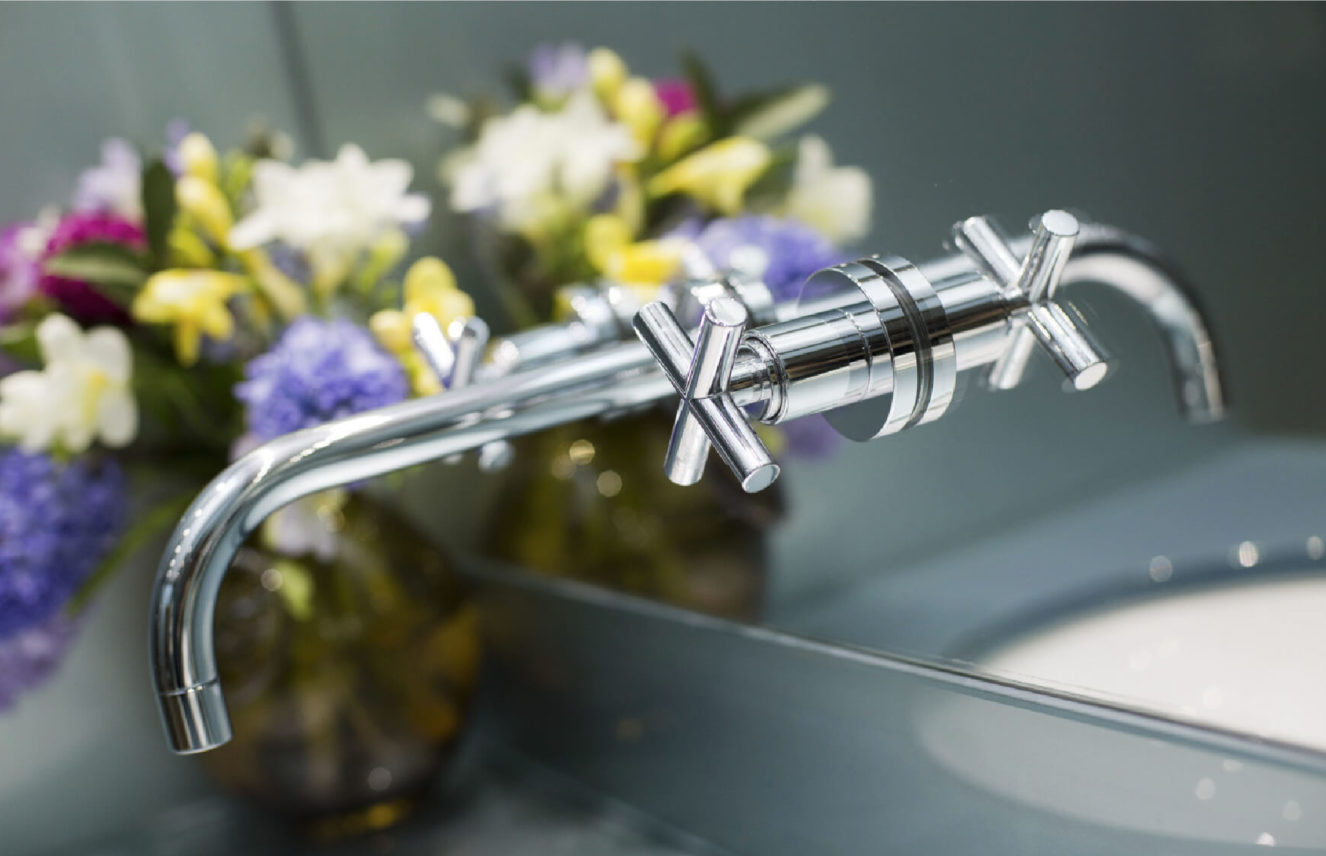 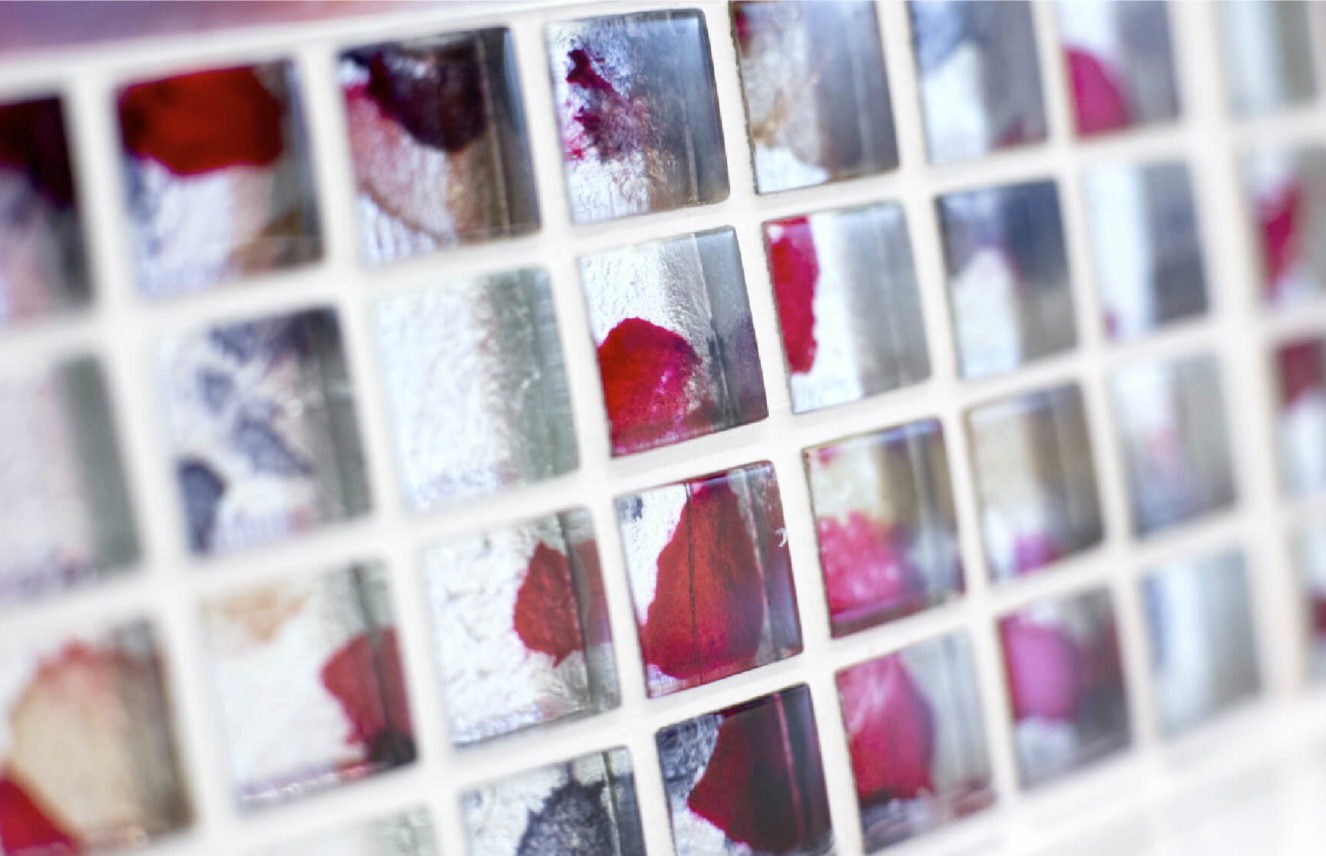 The installation took place in line with the build schedule for the property and was completed on schedule. Installing the glass was the greatest challenge, but our installations team were able to ensure that every piece fitted perfectly.

Of her completed home Marjory says, “I am thrilled with the finish of the bathrooms, as I am with the whole house. It is the perfect home in which to entertain for friends or host the family – my grandchildren love it!”

Want to see what Laings can do for you?
Book an appointment today and visit our
Showroom to talk to our team.

Sign up for our Laings newsletter to keep updated.